This is my story

For as long as I can remember, I've dreamt of living in the city. I didn't care what city, I just wanted to be in the middle of it all. I was the kid that laid in bed and asked my mom what I could use to hold my eyes open cause my fingers were tired. I didn't want to miss a thing. So I guess it's no surprise that I'm now headed to the concrete jungle that is New York City to begin this new adventure that God has called me to. Looking back on my life, it's amazing to see how He has worked to get me to this point. 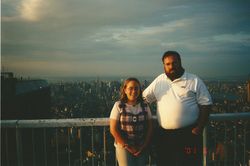 My dad and I on the top of the World Trade Center in June 2001
For my 13th birthday in June 2001, my dad took me to New York City for the first time. We did all the typical tourist things: visited the Statue of Liberty, went up to the top of the World Trade Center and Empire State Building, saw a Broadway show, went to a Yankees game. By the end of that trip I was hooked. I had fallen in love with New York. As we were in the cab heading to the airport to come back to Indianapolis, I looked up at the skyline and told myself that I would be back some day. 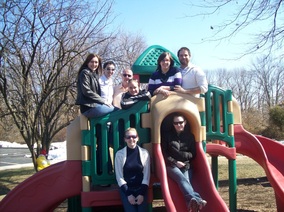 Group shot during the Campus House NYC mission trip
It took almost 9 years, but I finally made it back to New York City in March 2010, this time for a spring break mission trip with the Ball State Campus House and Center for Student Missions. I had been on several mission trips before, but this was my first experience with urban mission work. I knew from the instant that I got the email about the trip in the fall of 2009 that this was something I needed to do.

Center for Student Missions (CSM) is an organization that facilitates urban mission trips for student groups around the country. On our trip we worked with a number of organizations, including the New York City Clothing Bank, Love Kitchen, World Vision, and the Relief Bus. It may be hard to believe now, but I did not like working with the Relief Bus this first time. It was a cold, rainy day at the end of our trip, and I was just ready to be done. If you had told me then that I would be working with this ministry for years to come I would have just laughed. It's amazing how God opened my heart toward this ministry once I returned home to Ball State. 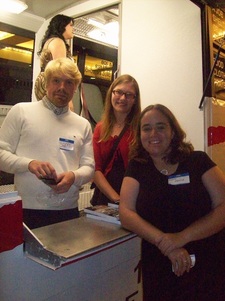 Sami, Susanna, and I at the 2010 Relief Bus banquet
After my first experience with the Relief Bus, I never thought that I would be interested in going back to work with them. However one day as I was looking around the Relief Bus website, I saw that they offered internships and decided to look and see what it was all about. Much to my surprise, as I read about this opportunity I knew that it was something I was being called to pursue. I got in touch with the Relief Bus staff, filled out an application, and the next thing I knew I was headed to Elizabeth, New Jersey to spend two weeks serving on the Relief Bus.

I would be lying if I said that this trip was easy for me. I didn't know anyone when I got to New Jersey. I was a pretty shy and timid person, and here I was going out to the streets of New York City talking to complete strangers every day. As my trip progressed, things got easier and I found myself really enjoying the work I was doing - I didn't even mind having to get up at 6:30 in the morning! The people that I lived and worked with were amazing, helping me to open up and serve the way God was calling me to do. I came to love talking with people on the street, learning their stories and just being a friend. The two flew by, and once again I left knowing that I would be back again some day soon. 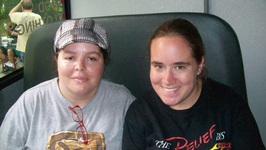 Me with my friend Tina in Harlem
In August 2010, about 2 months after I got back from my trip with the Relief Bus, a couple of friends and I attended a Chris Tomlin/TobyMac concert at the Indiana State Fair. Two of the last songs - City on our Knees and God of this City - really challenged me and I realized that God was calling me to go back with the Relief Bus again, this time for longer. I kind of pushed the thought to the back of my mind and jumped into my senior studying telecommunications at Ball State. Over Thanksgiving break I was visiting WFYI, Indianapolis' public TV station where I was working as a freelance transcriptionist, when I was offered the chance at a job when I graduated college. I took this opportunity as God telling me that this job was what I needed to do after graduation rather than going back to New York. He had other plans though.


For the next couple of months after I found out about this job opportunity I was all set to forget about the Relief Bus and just jump into work. Then God started whispering into my heart that maybe that wasn't the plan He had for me. It was during one of the main sessions at the Campus Crusade Indy Christmas Conference that He finally got through to me. I honestly don't remember what the topic of the message that night was, but I do remember it had nothing to do with serving the poor. But somehow God used something that was said to open my eyes and help me see that I needed to take the focus off myself and the things I wanted and put it back on Him and His heart for the lost and hurting people in New York. So I decided to put my job on hold for a while and spend 5 weeks working with the Relief Bus once again.

Me with my friend Rosa's daughter Ellie
Before I left for New Jersey to serve with the Relief Bus a second time, I told God that I would go this time, but I had no intention of ever moving there and working with the ministry full time. "I will not move to New Jersey." I should have known better. As soon as I got to New Jersey, I knew that this year was going to be different. It was still difficult to adjust, but I felt more at home and more like I was truly an integral part of the ministry right away. A couple of weeks after I arrived in New Jersey, I began to realize that maybe God was calling me to work in the ministry full time. I still wasn't willing to move to New Jersey. Instead, I found myself being called to join Austin and Darcy Bonds as they moved from New Jersey to Dallas, TX to start a similar ministry there. It made sense - I had a way to live there cheap so I didn't have to raise as much money, I would be helping to start a new ministry, and, most importantly, it wasn't New Jersey.

A few weeks after I decided that this was something I definitely wanted to pursue, I began to have little doubts. Not about whether or not I should work with the homeless, but about whether I should move to Texas or New Jersey. Oh bother. I originally dismissed these thoughts as regret at having to leave the Relief Bus family. I was sure God wasn't calling me to New Jersey. I was wrong. The more I felt God pulling and chipping away at my heart for New Jersey and New York City, the more sure I became that that was where I needed to be. So after talking with Austin and Darcy and members of the Relief Bus staff I made the decision to move to Elizabeth, New Jersey and serve with the Relief Bus for at least a year. I can almost hear God saying I told you so...

The most amazing part of this whole journey for me has been to step back and look at how God has directed my steps to lead me to this point. From my first trip to New York 10 years ago when the city captured my heart He has gone ahead of me to lay out the path. I did not enjoy my first experience with the Relief Bus, yet there I was looking at their website which He used to call me back to the city. The early job offer allowed me to focus on school in my final semester and not have to look for a job, leaving me free to make the decision to become a missionary since I did not officially have a position anywhere. I had actually applied for a year long internship with Turner Sports in Atlanta about the time I got to New Jersey this year. Not having heard back from them, I assumed I did not get the position. Just days after I made the decision to follow God's calling I received an email that they wanted to interview me. God's timing is perfect. There were also many personal conversations and observations that helped me make the decision to come back to New Jersey, and for those of you that helped with that I am thankful. God has been faithful in leading the way this far. I'm excited to see what He has in store in this new adventure!

Check out these other great pages!